First, figure skating is a winter sport, and occasionally, it is winter.  Also, Yuri!!! On Ice encompasses everything we’ve talked about this month:  friendship, love, and mentorship like in Assassination Classroom (here is the link if you did not read it last week).  We are going to revisit these topics and add another element to the list.  That element is  “beauty”.

The show centers around Yuri Katsuki and his coach Victor Nikiforov. Yuri is a figure skater who struggles in competition.  Victor is the Beyonce of male figure skating.  He left competitive figure skating to coach Yuri.  It does not take long for Yuri and Victor to become close.

If you recall in my piece on Gon and Kilua’s relationship in Hunter x Hunter, I said that they had unwavering support for each other.  Victor provides that same support to Yuri.  Yuri needs this because he felt defeated.  I understand the feeling of defeat.  But like Yuri, you do not want to let down the person that is in your corner through your journey.  So you dust yourself off and you keep going, if not for yourself, for them. 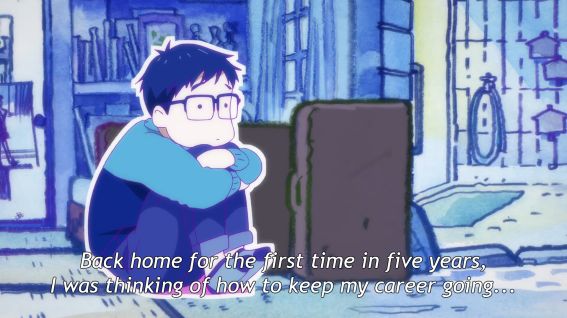 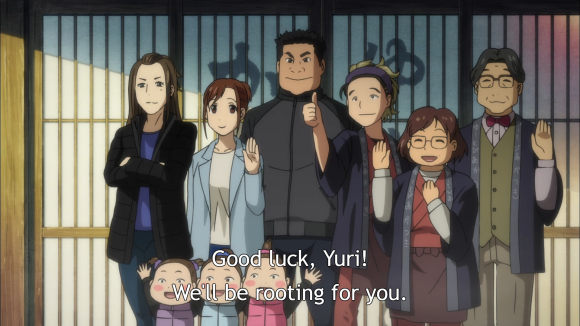 This is appropriate because the theme of Yuri’s skating is love.  But I don’t want to to talk about Yuri’s love, I want to talk about his family’s love for him.  It must have been comforting for Yuri to go home to his family after his defeat.  Like Mob was proud of his brother in Mob Psycho 100, Yuri’s family are proud of Yuri, regardless of his failings.  It warmed my heart to see this because there is nothing like the feeling of unconditional love and support that can come from loved ones. 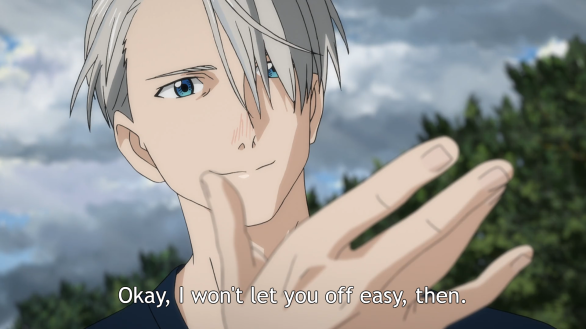 Without a doubt, Victor is a mentor to Yuri.  Like Kuro-sensei in Assassination Classroom, Victor guides Yuri but allows him to make choices for himself.  It makes Yuri more confident in his performance.  He gave Yuri criticism when it was warranted and compliments when they were earned.  To me, that is what mentorship is all about, knowing your protege and what they need to succeed.

You don’t have to be a figure skating fan to appreciate the beauty of Yuri!!! On Ice.  Personally, I’m not a figure skating superfan, but I do like it.  It’s both graceful and athletic at the same time.  Yuri!!! On Ice does a great job of heightening the aesthetic of the sport, especially the opening sequence.

The beauty of that opening sequence reminds me of when I went to the mountains of Pennsylvania in the middle of winter ( I was a wingman for a friend and we were driving from the Virginia coast if you’re curious).  I had never seen snowflakes as large as those in the mountains.  The untouched white snow on the mountain had tall, snow-capped evergreens sprouting from its base.  The view is awe-inspiring, and that is from someone who is not a fan of snow.  But, you have to respect beauty when you see it, just like that opening sequence.  The flow of colors, the movement of the skaters, and the song all worked to create a moment that is aesthetically satisfying.

The holiday season is nearing its conclusion and 2018 is practically here.  Before we all make our toasts to a new year and resolve to go vegan, let’s celebrate the friends, family, mentors, and beautiful things we have in our lives.  Like Yuri, let’s embrace the love, guidance, and camaraderie that makes the holidays (and life) worthwhile.  Happy Holidays!!!!