Hi everybody.  I hope you enjoyed our look at Iron Man 2 for MC Tuesday.  This past Tuesday was my birthday.  So in honor of your’s truly, I decided to tell you a little about myself.  But I do not want to just spit out factoids.  So, I am going to draw parallels between my life and the anime Blood Blockade Battlefront.  This is one of my favorite anime because I always have a good time watching it.  Sometimes, you do not want a show that is too dark or complex.  You just want a decent story mixed with some action and humor.

Now, before I talk about the show and myself, I want to say that I usually do my anime post on Thursdays.  I have no excuse for not posting on the correct day.  To be honest, I was playing Persona 5.  You ever start playing a game and say “I’m just going to do one more mission”, or “once I get to this point, I’ll stop”?  That only works for games that do not have long missions or stages.  Otherwise, you are sitting there for hours, completely neglecting your blog.  But, I digress.  Blood Blockade Battlefront is based on a manga by Yasuhiro Nightow.   Here are the top three things that me and the show have in common.

1. In a strange land 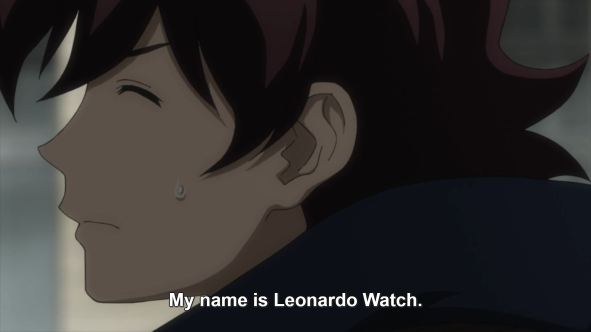 Leonardo Watch moves from his hometown to New York City.  However, it is now Hellsalem’s Lot after a portal to another dimension opens, allowing all manner of monsters, demons, and others roam between dimension.  He comes to the strange town to find a cure for his sister’s blindness.  Leonardo has to adjust to a new life in a new town.

I completely understand Leonardo’s to adjust to strange surroundings.  I’ve lived in various places throughout my life, one vastly different from the other.  The open ranchland of Central Texas differs from the desert of West Texas.  The coastline of Virginia differs from the rivers in Louisiana.  Every place has its own cultures and oddities.

Shortly after arriving in Hellsalem’s Lot, Leonardo joins Libra.  If you have never seen the show, Libra is a top-secret organization that maintains the balance between the human world and the other world.  This team is a talented group, each with unique capabilities that benefit the team as a whole.  My favorite Libra member is Zapp Renfro.  Zapp is hilarious.

Being a part of a team describes most of my adult life.  While in the Army, we all relied on each other to complete the mission.  When one soldier lacks a particular skill, someone else will pick up the slack.  Also like Libra, your battle buddies are not just your coworkers or teammates, they become your family.  I have family all over the country.

Before moving to Hellsalem’s Lot, Leo is bestowed with the “All Seeing Eye of the Gods”.  Leo can see things with these eyes that others cannot see.  He uses the eyes to help Libra fight crime.  But, the eyes came at the cost of his sister’s vision.

I think I am a decent writer.  I discovered my love for it several months ago.  But, like Leo’s amazing eyes, my pursuit comes at a price.  Sometimes, I neglect other things for the sake of my writing.

Well, there you have it.  I hope you know a little more about me than before you started reading this.  If not, then I hope you know more about Blood Blockade Battlefront.  I encourage you to check it out and let me know what you think.  This Sunday, we conclude High School Entrance Exam.  Until then, here’s to seeing another birthday!