Hi everybody!  Welcome to the first Anime Thursday of February.  February is a jam-packed month of stuff to celebrate.    First, there’s Black History Month.  As a woman of color, I’m proud to be a part of a people that dream big, persevere, and make significant impacts in the world.  Also, there’s Valentine’s Day.  I’ve never been a big Valentine’s Day person.  For me, forced romance is very sadistic and masochistic.  But no judgment to those who like this holiday.  Last but not least, it’s my husband Beardo’s (not his real name) birthday.  So in honor of all these things, I will talk about shows I love, black anime characters I love, and the man I love.

To kick off Things I Love Thursday, I will talk about an anime I’ve recently started watching and already absolutely love, One Punch Man.  I know I am late to the party but you know, so many anime, so little time. I think instead of telling you about a show you probably already watch, I will tell you why I love it.  The show is based on a manga by Yusuke Marata.  If you recall from a previous post, he also behind Mob Psycho 100.  Spoilers!

Saitama is our main character in this story.  This dude is strong, really strong.  But, “saving the world” is not at the top of his list of priorities.  In the third episode, he is fighting a humungous beast.  You think that Saitama is anxious because it appears that the monster is getting the better of him.  No, my friends.  He is upset because he missed a sale at the supermarket.  He thinks it is Friday, but it is Saturday.  Saitama is devastated.  Meanwhile, this monster thinks he is winning, pulling out all the stops.  That is until Saitama splits him open with one seemingly effortless punch.

According to Saitama, his power does not come from drugs, machines, superhero parents, or magic spells.  His powers derive from doing 100 push-ups,  100 situps, 100 squats, and a 10km (6.2mi) run every day for three years.  His disciple, a cyborg named Genos, thinks it is impossible for it to be that “simple” (of course this is simple to a cyborg).  But this is the source of Saitama’s power.  You have to admire the self-discipline and determination it takes to do this regimen every single day for three consecutive years.  I need to take notes about this discipline and determination, not so much the exercise regimen.  I can barely get through 25 minutes of yoga.

He Has No Time For Your Mess It seems like every episode shows someone that is merely a nuisance.  A ninja name Sonic appears in some of the episodes.  But, he is only a fly for Saitama to swat.  Then there is the episode with that seaweed monster.  Actually, he comes in handy because Saitama uses his tentacles(?) for dinner.  Some of the best heroes in their world could not defeat this monster and Saitama makes him into greens.  I admire how much he doesn’t care about your stupid powers. 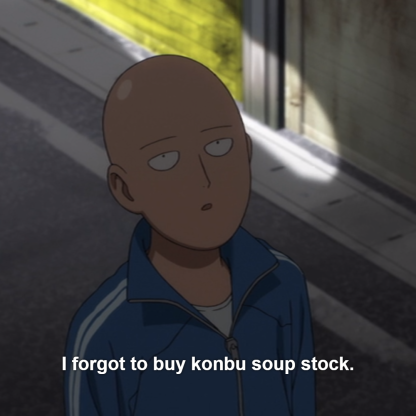 Saitama is grossly underestimated, often disrespected, and always misunderstood.  However, this does not stop him from living his life.  He does not try to fit in, go with the flow, or be everyone’s friend.  He is a hero for fun, not for your approval.  To me, that is the coolest thing about Saitama.  I still have four episodes left in the first season, but I know I will continue to be entertained.

How do you feel about One Punch Man?  Let me know!  Next week, I talk about a guy that, like me, appreciates a big, puffy afro.  We take it back to Afro Samurai.  Until then, I will see you this Sunday for Sunday Drama and I’m Mita, Your Housekeeper.