Hi everybody!  Welcome to Anime Thursday!  I hope you enjoyed my look at The Avengers on MC Tuesday.  Today, we are going to discuss 2007’s Afro Samurai.  The show is a mixture of stylish animation, a cool soundtrack, and the dubbed version has one of the most recognizable voices in Hollywood.  It is based on a manga by Takashi Okazaki and released by Gonzo.  In case you have forgotten the story, let’s start with a brief synopsis. 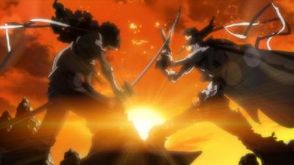 What is it with Samuel L. Jackson and revenge/vigilante justice movies?  Shaft is a revenge/justice movie.  He appears in Kill Bill, another revenge movie.  The sharks wanted revenge (and freedom) in Deep Blue Sea.  And now we see Afro Samurai, whose entire premise is revenge.  So Samuel L. Jackson plays the lead character Afro.  Afro’s dad was the number one samurai in all the world.  But, one day, he is cut down by Justice (Ron freaking Pearlman), the number two.  The rules of this world are that only the number two can challenge the number one, but anyone can challenge the number two.  The number one has god-like powers when they obtain the headband.  Afro goes on a mission to chop down the numbered headbands so that he can avenge his father’s death.  It’s a simple premise, but you do not need a complex plot to enjoy the fights in this show.  Along for this journey is Afro’s “Jiminy Cricket”.  Ninja Ninja (also played by Jackson) is Afro’s invisible friend during his vengeance quest.  I also think he is the audience’s comic relief in the heavy story. 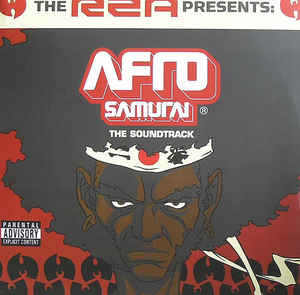 Hip Hop legends Wu-Tang Clan have a very distinctive sound.  That is thanks to Wu’s member and producer RZA.  He produced most of Wu’s tracks.  He also scored music for Afro Samurai.  You can hear him rapping on the opening theme.  Watching the show is just like listening to a Wu-Tang album.  Don’t believe me?  Go listen to Wu Tang’s Protect Ya Neck or C.R.E.A.M. (my personal favorite), then go listen to some of the tracks from the show.  RZA’s sound goes perfectly with the cool yet dangerous, ancient yet modern world of Afro Samurai. 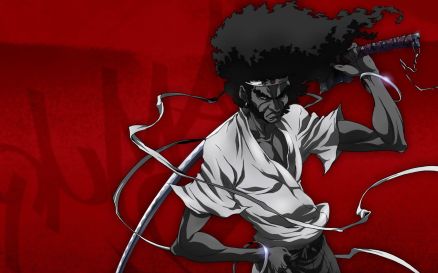 As someone who rocks an afro, I have to show respect to Afro’s massive fro.  I wonder what it looks like after he wakes up in the morning?  You see, afros get bed head too.  So, if you lay on your side, that side of the fro is completely flat in the morning.  Then you spend ten hours re-fluffing and shaping your hair.  I cannot imagine how long it takes him to get the fro together.   Maintenence aside, the afro was a symbol of power and pride in the 60s and 70s.  It is fitting that he is rocking the fro.  He is a powerful warrior, strong in his convictions and driven to reach his goal.  The fro is a perfect symbol for the samurai. 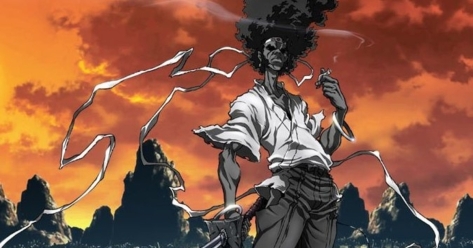 So what can we take away from Afro Samurai?  I think that the main takeaway from the show is how a black character is represented not only in anime but in any animation period.  Most of the time in animation, especially animated comedies, we get a lot of “hey, look at the black folks doing black folk things”.   Sometimes, it is uncalled for.  We the audience sees they are black, we do not need it reiterated over and over again.  Let’s get some complexity in our black characters.

Though the premise is simple, Afro himself is a samurai.  Not only is he a samurai, he is the best samurai in the world.  We see a black man with a large afro being the greatest samurai in the world.  In a few weeks, we will see a great black superhero in Black Panther in a huge Marvel movie. We saw a strong black family in shows like The Proud Family.  All this without the “hey look at the black folks doing black folk things”  vibe.

Well, that’s it!  What do you think of Afro Samurai?  Let me know.  This Sunday, we will talk about episodes 3-4 of I’m Mita, Your Housekeeper.  I can’t wait to see what happens now that Stupid Dad’s secret is out.

Don’t forget to drop in on my social media.  My Facebook page contains mini blogs so make sure you check it out.