Welcome to Couch Cruisin’!  We are going back to 2001 and talking about X.  X is one of the first anime I encountered, along with Inuyasha.  It is based on a manga by Clamp and released out of Madhouse Studios, home of Hunter x Hunter, Death Parade, One Punch Man, and many, many more. So, let me take you back to how I discovered X.

My intro to X

It was around 2003.  I was in a community college where I met this woman.  We connected over anime.  I told her I watched Vampire Hunter D and Akira.  At that time, that was the only anime I had seen.  She goes berserk.  “Oh my God!  Have you seen Inuyasha?”  I told her no.  Her eyes become huge.  “WHAT!? You’ve never see Inuyasha!?”  To say this girl was a fan of Inuyasha is a major understatement.  She would buy the manga, and the spine had to be picture perfect.  Inuyasha was definitely her husbando.  I get her obsession with the show.  She was 30, living with the meanest father and most fragile mother in the world, and she had a curfew.  I guess it was easy for her to immerse herself in Edo Japan with Inuyasha and Kagome.

It was this girl that introduced me to both Inuyasha and X.  At the time, I liked Inuyasha (not as much as that girl), but it was X that really spoke to me. 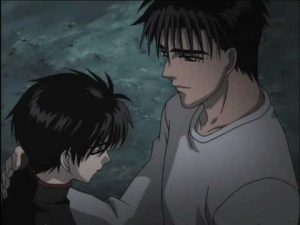 Before I give you my present-day thoughts on the show, let me tell you the premise.  So this kid Kamui’s mother died in a fire, sacrificing herself to give birth to a sword that her young son is supposed to wield.  You see, the show is based on a prophecy of an unavoidable war between the Dragons of Heaven and the Dragons of Earth.  The Dragons of Heaven want to save humanity, while the Dragons of Earth want to destroy humanity for the preservation of the earth.  Kamui is tapped to lead the fight on either side of the battle.

Kamui doesn’t give a damn about any of this.  His only concern is looking after his childhood friends Kotori and Fuma.  After his mother’s death, he returns to Tokyo to look after his old friends.  Both sides of the fight converge on Tokyo as well, awaiting Kamui’s decision.  To protect Kotori and Fuma, Kamui decides to become a Dragon of Heaven.  Little does he know, that his friend Fuma has to fight against him, whatever side Kamui chooses.  So, Fuma completely changes and becomes a Dragon of Earth.  Long story short, new Fuma kills Kotori, Fuma and Kamui battle, and Kamui sacrifices himself to create a barrier around the world, saving humanity.

Back then, the show was everything.  I paid $100 for a DVD collector’s edition of X.  But this is before watching shows like Cowboy Bebop, Samurai Champloo, Hunter x Hunter, and others.  It is before Crunchyroll and Funimation, before Couch Cruisin’.  So, what does modern-day Angela think of  X?  Can it stand up to other titles?  Absolutely NOT!

There are so many irritating things about this show.  There are only two characters I like: Subaru and Seishiro from Tokyo Babylon.   Everyone else can suck it!  Kamui is supposed to care so much about his friends, yet he treats them like he can’t be bothered.  Everyone else has these annoying quirks that make me not care about them. 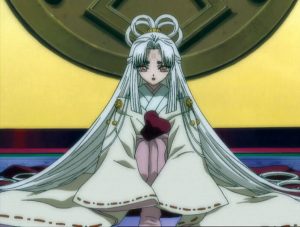 There are two characters that are the absolute worst.  First is the seer Hinoto from the Dragons of Heaven.  She manipulates Kamui by keeping important information from him.  I find that extremely vexing.  Then there’s Yuzuriha Nekoi.  She’s the one with the dog Inuki, that comes from her soul.  Look, I know she is young and sheltered.  But she is obnoxious.  When her dog dies and she soul -births a new dog, do you know what she names it?  Inuki!  That gets on my nerves more than anything.

It’s amazing how tastes can change over time.  Back in 2003, I thought X was the zenith of quality anime viewing.  Now, after filling my eyeholes with so much anime from different times and genres, X just does not cut it.  But, even though my anime palate has diversified and the show cannot compete, it is still special because it was one of my first introductions to anime.

Well, that’s it!  I do not know what happened to crazy Inuyasha lady.  She probably married someone that looks like him and changed her name to Kagome.  Next Tuesday, we start our Old School MCU series with Daredevil.  Until then, see ya later!