Happy Saturday everyone!  I did not procrastinate on my homework this week, so that left me time to tackle Butlers x Battlers, an anime I’ve been trying to tackle for two weeks.  The show changed a little since my first review, so I thought I would revisit it.  Unlike Libra of nil Admirari, Butlers actually improved slightly.  Honestly, I did not expect this to occur.  It is not finishing in some extraordinary way, but it gets improvement points.  Before I dive into the improvements, let’s catch up.

We Are All Butlers 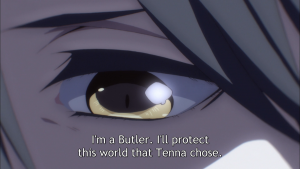 By now, we learn that everyone surrounding our hero J are descendants of or a part of the “bloodline”, Hayakawa, his friends, the cafe owner, Holmes, Watson, Dracula, me, you, my dog. We also learn that headmaster Mikuni is from the past.  He’s the one responsible for J’s sister Tenna’s death.  Mikuni was trying to return to the past and recreate the world so that the distortions never happen.  Mikuni’s really bitter because his parents died.  His parents were a part of the bloodline, except they were with the group trying to go back in time and stop distortions from happening.  I hope you’re still with me.  He solicits the help of plant enthusiast Hikari who wants to go back in time to be with his parents. 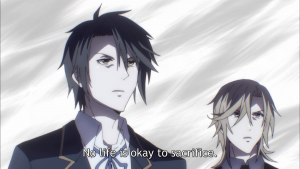 So, the final battle commences.  It’s J and the gang versus Mikuni and Hikari.  Apparently, J can’t fight as well as he thinks because Mikuni and Hikari hand him a beatdown.  Hayakawa steps in eventually.  Mikuni turns on Hikari during the battle.  Everyone else is sort of standing around.  After a while, J finally gets the pendant that belonged to Tenna and Hayakawa’s broach.  J put’s them together and it makes a key.  With this key and the powers of the bloodline, he is able to make a wish seal the distortion, defeating Mikuni who is killed by the seal (or just disappeared into it.  Who knows).  Everyone lives happily ever after, best friends forever. 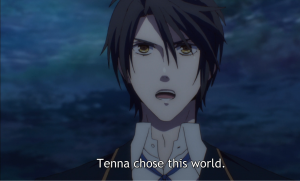 Back in April, I said that the show’s story-telling was all over the place.  By the end of the show, it is a bit better.  At least we know everyone’s purpose and it wasn’t just a bunch of cute boys being cute.  So, good job with that show.  The show was still boring but at least there was a clear story to follow.  I did roll my eyes at that final fight scene.  It felt anti-climactic and lazy.  They could have done something with those other characters.  Now, I know J told everyone he would “handle it”, but I think it would have made for a better fight scene if there was more group participation.  Teamwork makes the dream work fellas!  And don’t get me started on the “make wish and we’re all okay” bit! 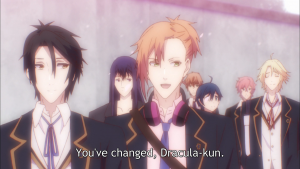 Boring.  I finished this show because I wanted to wrap it up.  Thank goodness some kind of story developed.  Otherwise, this would have been another Libra, a painful experience.

Well, the spring season is coming to a close.  Next time, I will give you my overall thoughts on the spring season.  I do not have a summer watchlist yet.  Hopefully, I’ll have one next week.  Until then, be sure to join me for Blade 2 on MC Tuesday.