Hi everybody!  Well, it’s anime Thursday and its time to take a look at our first show of the summer season.  We will kick it off with a look at Angels of Death.  When compiling my watchlist, nothing in the summer season really moved me.  But, this looked crazy and I’m always game for a crazy anime.  The anime is based on the game and manga by Makoto Sanada and Kudan Nazuna.  Let’s get some background.  Spoilers folks!!! 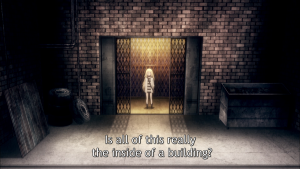 Rachel Gardner is a young girl who wakes up in a building of some sort.  Her memory is a little fuzzy, but she does know that her name is Rachel and she saw a bunch of people die.  She winds up in an ally, where she bumps into Zack.  Zack is a cross between a mummy and a reaper who loves to see panic on people’s face before he kills them.  Rachel becomes his target but he doesn’t kill her after she asks to die.  The two team up to escape a nightmare building where there are killers on each floor. 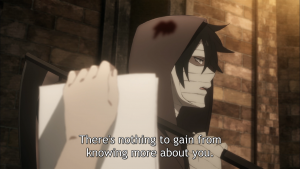 What the hell is going on in this show?  I spend a lot of time saying “huh?” or “what?”.  If you recall from my watchlist post, this is something I was afraid of.  This looks like Juni Taisen all over again.  We are going to see a bunch of characters, doing a bunch of things, with very little storytelling.   There is somewhat of a story.  Rachel is stuck in the building with Zack and they are trying to survive.  Her parents are dead and she wants to die.  But, if you recall, Juni Taisen has something of a storyline as well.  The story is not satisfying.  We are only two episodes deep.  Maybe it will get better in future episodes.  If not, we are stuck on a journey with crazy characters with a mediocre story.  They are trying to build some intrigue with this “Rachel doesn’t remember” bit.  I think the anime should get that part over with, and just make an action-packed anime, showing Zack and Rachel’s attempts to escape. 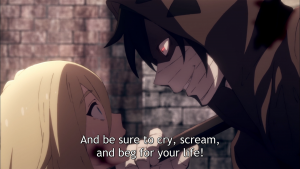 So far, I’m not impressed.  What I wanted was something a little more thrilling.  I wanted to be on the edge of my seat.  I do not dislike it, but it’s not especially impressive.  Maybe it will pick up the pace and give us something to keep us interested.

Well, that’s it for Angels of Death.  Next time, we are talking Angolmois: Record of Mongol Invasion.  I have already watched the first two episodes and I do have thoughts.  Until then, this Sunday is Serenity Sunday and we are watching the first two episodes of Firefly.  Next Tuesday, we will conclude the regular postings of MC Tuesday with (sigh) Ant-Man and Wasp.  By the way, I will be attending my local anime festival.  This is my first anime con event and I’m looking forward to it.  I will see you on Sunday!!