Hello everyone!  It’s anime Thursday and we are going to discuss Angolmois: Record of Mongol Invasion.  In my summer watchlist post, I say how historical anime are not usually my cup of tea.  But, I decided to give this on the old college try, since most of the summer anime did not capture my attention.  Sometimes, you have to branch out and explore.  That’s how you discover anime like MEGALOBOX.  Before I give you my thoughts on this historical drama, I’ll give you a little background.  The show is based on a manga by Nanahiko Takagi and released out of NAZ studios. 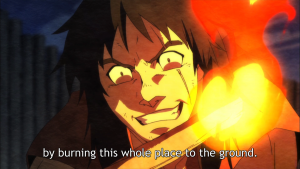 13th century Japan is in trouble.  That trouble comes in the form of incoming Mongol invaders.  The first stop on the invasion tour is the island Tsushima.  To prepare for the invasion, Tsushima pleads with the government to send help.  They send a boat full of prisoners that are exiled to the island.  One of the prisoners is Kuchii Junzaburo.  Basically, Kuchii is a super soldier.  He fights with swords, he shoots arrows, he’s a strategist. Kuchii is asked by the beautiful princess Teruhi to fight on behalf of the island.  The show follows the battles of Kuchii, Teruhi, and the rest of the island. 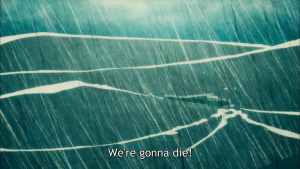 The animation!  Why?  Watching this anime is reminds me of Magic Eye.  If you don’t know or don’t remember Magic Eye, it’s those books and posters that you put close to your face then move it away to see a picture.  When I first saw the animation, I almost stopped watching.  One of the first scenes is in the rain while the exiles are on a boat.  I know they are trying to show the turbulent sea and the horrible weather.  But the rain is so heavily drawn, that it is distracting.  I am not crazy about the animation whatsoever.

Action on the island 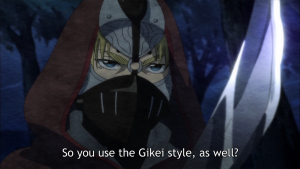 Though the animation is not my favorite, Angolmois brings the action.  The first three episodes contain at least one fight scene.  I like that the show is not overburdened with exposition, conversations, and dull flashbacks.  The creators realize that no one is watching for long, Shakespearean speeches.  They find a balance between moving the story forward with dialogue and getting the audience to the fight.  My favorite fight scene so far is the one in the first episode between Kuchii and the masked individual that fights for the Mongols.  The skill of both fighters is breathtaking. 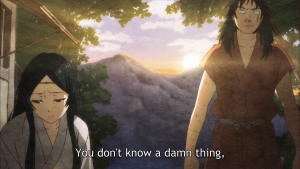 I do not care for the visual but it’s not unwatchable.  Once your eyes adjust, you are in for an intense and action-packed show.  I’m looking forward to seeing how Kuchii will lead the inexperienced fighters to a possible victory.

Well, there you have it.  How do you feel about Angolmois: Record of Mongol Invasion?  Let’s talk about it!  Next week was supposed to be ISLAND.  Honestly, ISLAND is so boring that I do not want to entertain it.  I’m actually removing it from the watchlist.  I’ll let you know on Tuesday the substitution.   Until then, I’ll be back on Sunday for episode two of Firefly (yay!).  Also, next Tuesday will be our first Rod-Tino Tuesday.  I will let you know on Sunday which Robert Rodriguez movie I will watch.  See you later!