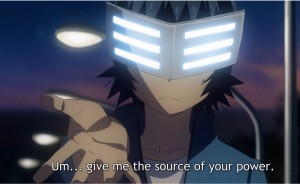 Hello everyone!  Happy August to all!  Today, we are going to talk about Planet With.  I know I’m a day late.  There’s no excuse for that, I was a little lazy yesterday.  But I’m energized after some yoga and meditation, and I’m ready to tackle this review.  This is a new addition to my watchlist.  I removed ISLAND from the list because it is extremely boring.  But, I digress.  Planet With is from J.C. Staff, the same studio that brings you Food Wars, Ghost Hunt, and The Disasterous Life of Saike K.  Let’s get a little background on the show before I give you my thoughts on it.

Soya is a high schooler with amnesia.  He began school a few weeks ago and has no memory of his life before.  All he knows is that he resides in the home of maid Ginko and Soya’s sensei.  The sensei is a giant cat that only Ginko understands.  One day while Soya is in class, a mysterious flying object appears.  Seven heroes appear in giant robots to defeat the object.  Sensei and Ginko summon Soya to the battle.  It turns out Sensei is Soya’s fighting machine, which is powered by psychic energy.  But, Soya is not tasked with fighting alongside the heroes.  He has to defeat the heroes!  These heroes are apart of Soya’s forgotten past.

Here for the fight 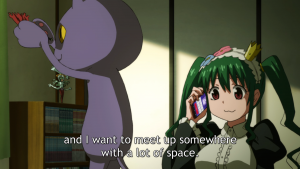 You know, I really need to stop saying I do not like mecha anime.  I liked Darling in the FranXX and I like Planet With.  The latter has a decent story and establishes complicated relationships.  Plus, the show has plenty of action to complement the story.  They even slide in some humor with Soya’s obsession with meat, and Sensei’s perverted nature.  The anime contains, tragedy, friendship, humor, and rage.  The only thing I have yet to see is some sort of romance.  I wonder if they are going to include this as well? 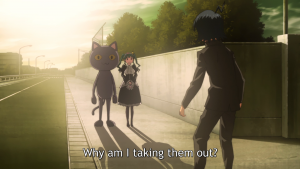 Usually, when I discuss a show’s pacing, the show is moving too slow and I’m losing interest.  Planet With has the opposite problem.  They reveal a lot in the first four episodes.  The show reveals stuff I would not expect seeing until mid-season.  My concern is that near the end, they will have nothing left to say.  That’s when shows get stupid and start throwing stuff at you, kind of like X-Files around the fifth or sixth season.  Hell, it was hard writing a synopsis without revealing key information. 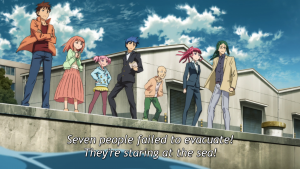 Despite the rapid pace, the show is fun.  It’s not a legendary anime, but it is a pretty entertaining show.  I’m glad I replaced ISLAND with it.  I wonder if it will have a season two?  And if so, what will the season contain?  I guess we will see.

Well, that’s it for Planet With. What do you think of the show?  Let me know!  Next week, we check-in with Angels of Death.  Until then, be sure to join me to this Sunday for Serenity Sunday and episode three of Firefly.  Next Tuesday is Rod-Tino Tuesday where we will watch one of my faves, Quentin Tarantino’s Death Proof.  I hope you enjoy your weekend!