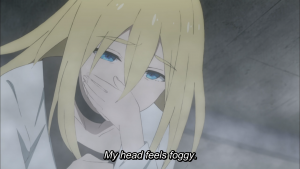 Hello everyone!  Welcome to Anime Thursday.  Today, we return to Angels of Death.   If you missed my initial thoughts, you can find them here. We are on episode five of the show.  So far, I’m not crazy about how the story unfolds.  I’m trying to think of a show that has a similar plot but a better telling of the story.  The closest I can think of is The Future Diary.  I find that I compare a lot of things to that anime.  Maybe it is because it is one of my favorites.  But there are parallels between it and Angels of Death. Both are about a guy and a girl trying to survive a situation where crazy people are out to kill them.  The female protagonists are hiding things from the male (we have yet to discover Rachel’s secret).  Both male protagonists are oblivious in one way or the other.  So, why is Angels of Death not satisfying?  Let’s look at a few things.  But first, let’s catch up on the story.  Spoilers folks!!!

Should we take the stairs??? 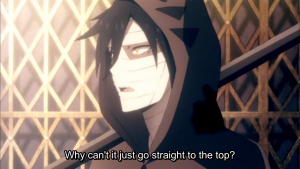 At this point, Rachel and Zack have faced a few enemies as they take the elevator through the building.  First, there was the doctor that was obsessed with eyeballs.  After that, there is the little boy with a crush on Rachel.  I was surprised to see that he was a regular kid underneath the pumpkin head.  Worst of all is the annoying girl that thinks she’s a game show host or something.  They have already devoted two episodes to this pain in the butt woman.  It looks like it is going to go on for a third.  Zack and Rachel are working as a team to escape the building.  Which brings me to my first problem.

Who cares about Rachel and Zack? 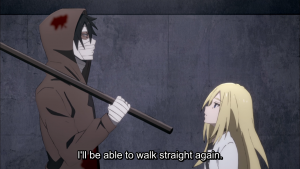 Honestly, I could care less about any character in the show.  Even after they revealed a little of Zack’s childhood, it felt unfinished.  Maybe they will reveal more of his story later.  It’s like the show gave us this tidbit so that we would have some sympathy for Zack.  The problem is that I did not hate him in the first place, I did not like him either.  So sympathy is a feeling that I cannot muster.  He’s just there, doing things.  Rachel is in the same boat.  I know she’s supposed to be emotionally vacant.  When a character does not emote, they have to compensate for it with some other quality to keep us interested.  Jake Gyllenhaal in “The Good Girl” comes to mind when I think of emotionless, but interesting. 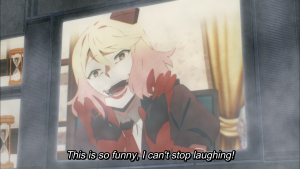 If the show does not want us to care about the main characters, they can at least make the villains more compelling.  This is especially the case if they are going to commit more than one episode to each villain.  Juni Taisen is not a good anime, but the creators give us reasons to maybe care about the “bad guys”.  Take this obnoxious woman we are watching on Angels of Death.  If the audience is subjected to Catherine’s irritating personality, they need to give us some history about her so I do not feel like I’m wasting my time. 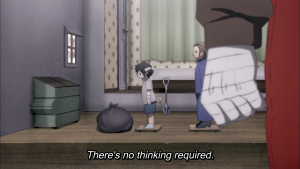 Ultimately, what does this anime want from me?  How am I supposed to feel or react?  I just do not know.  I feel like I’m waiting at a bus stop but I do not know where the bus is going.  But, I will keep standing at the bus stop, hoping that it takes me somewhere awesome.

Well, that’s it for Angels of Death!  Let me know your thoughts on the show!  Next week, we check in with Angolmois: Record of Mongol Invasion.  Until then, be sure to join me on Serenity Sunday for Firefly episode four.  Rod-Tino Tuesday will feature The Faculty, directed by Robert Rodriguez.  The weekend is almost here!