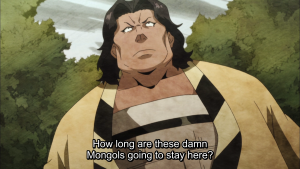 Hello everybody.  It’s Anime Thursday, and we are returning to Kuchii and Angolmois: Record of Mongol Invasion.  If you did not read my first impression about the show, you can do so by clicking here. If you did read it, then you will recall that my only issue with the show is the gaudy animation.  We have six episodes now.  How has the show faired since that first impression?  Let’s find out.  But before we do this, I will catch you up on the first five episodes.

Kuchii verses the invaders (and the island folk) 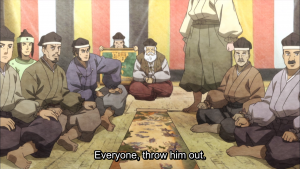 The tiny island of Tsushimi is knee-deep in Mongol invaders.  Luckily, they have battle-tested Kuchii on their side.  But Kuchii has other problems besides the invaders, it’s the island inhabitants. He tried to tell the village lord how to earn a victory against the Mongols, but the lord would not listen and threw him out of the council about how to defeat the Mongols.  The result is the death of the lord and his son, the family of our female protagonist Princess Teruhi.  Then, he is betrayed by another islander, resulting in the princess getting hurt. 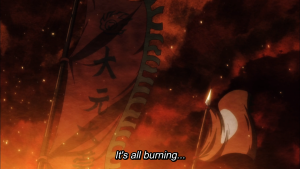 It took awhile, but the Tsushimi folk eventually follow Kuchii’s lead.  His leadership leads to a couple of victories for the small island.  But, the capital is decimated. 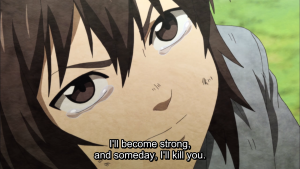 So far, the show maintains my interest.  Most of it has to do with the relationships Kuchii establishes with other characters.  For example, Kuchii kills a traitor.  Instead of abusing the young son of the traitor like other villagers, Kuchii tells the child that he is the one that killed his father and that he needs to get stronger so he can avenge his father’s death.  From this conversation, the child finds strength and the will to survive.  Kuchii has a way of motivating people without being sappy or getting their hopes up.  That’s an admirable quality in a leader, honesty, and sincerity without deception. 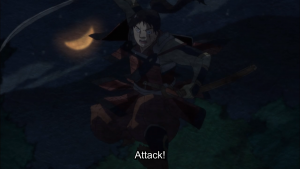 At the end of the day, I like the story.  It is well-paced and the characters are interesting.  The small battles are exciting and keep me cheering for the island folk and exiles.  There’s nothing anyone can do about the animation, but, for me, it is becoming less of a problem.

Well, there you have it!  Next week, I’m going to stray from anime a little and talk about a recently discovered fave of mine.  It’s called Harmonquest.  I cannot wait to talk about the show, which is on VRV.  Until then, be sure to join me this Sunday for episode five of Firefly for Serenity Sunday.  For Rod-Tino Tuesday, I will discuss Pulp Fiction.  I will see you later!  Don’t forget to follow me on my social media!