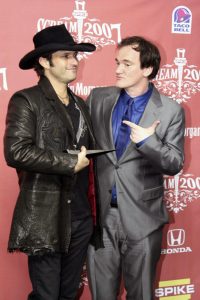 Hi everybody!  Welcome to our first Rod-Tino Tuesday, where we watch a movie directed by either Quentin Tarantino or Robert Rodriguez.  If you want a list of the movies, check out my preparation post from Sunday.  First on deck is 1996’s From Dusk Till Dawn, directed by Robert Rodriguez.  I can spend an entire week talking about this movie.  Let’s not waste time.  Here’s a little background.

Making it to Dawn 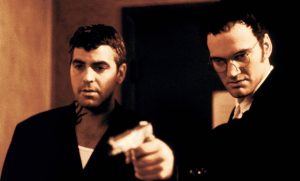 Theif Seth Gecko (George Clooney ) has escaped from prison with the help of his psychopathic brother Richard Gecko (Quentin Tarantino).  The plan is to escape to Mexico.  To accomplish this difficult task, Seth and Richie kidnap faithless pastor Jacob (Harvey Keitel), and his kids Kate (Juliette Lewis) and Scott (Ernest Liu).  They all pile into Jacob’s RV and make it to Mexico.  Jacob, Kate, and Scott must remain with the Gecko brothers until the brothers meet with their contact Carlos (Cheech Marin).  The rendezvous point happens to be a rowdy bar called the Titty Twister.   What they soon learn is that the bar’s dancers, staff, and the band are all vampires.  Now the brothers and the family along with biker Sex Machine (Tom Savini) and Vietnam veteran Frost (Fred Williamson) have to survive this hellish bar.

To pick a favorite scene in this movie is difficult.  I will not even try.  I will just tell you about some of my favorite moments. 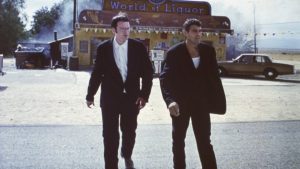 What’s brilliant about the opening scene is that you do not really know what is going on.  You see the Texas Ranger (Michael Parks) and cashier Pete (John Hawkes) having a casual and offensive conversation.  It is surprising to see the Gecko brothers pop-up.  A casual encounter is instantly turned into a tense and exciting moment. 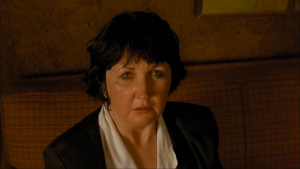 The scene where Seth walks into the hotel room to find that Richie has assaulted and killed their hostage Gloria is an important scene.  First, Seth and the audience begins to understand the depths of Richie’s depravity.  He is sadistic.  This works against him in a scene I will discuss in a moment.  Second, the audience becomes aware that they are not dealing with warm and cuddly criminals.  We are not about to embark on some Robin Hood, Jack Sparrow adventure.  It is simply not that type of party. 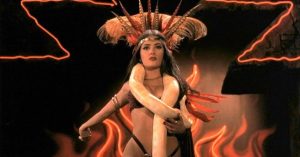 The scene where Satanico Pandemonium (Queen Selma Hayek) does her sexy snake/table dance, something very interesting occurs besides the dance.  During her performance, she spots Richie sitting in the audience.  One can deduce from subsequent scenes that Satanico is the head vampire, which means she’s probably the oldest.   I think she sees Richie’s depravity.  She recognizes his foot fetish and knows she can use that to seduce him (go back and watch the movie.  Richie has a foot fetish).

These are just a couple of scenes in a move riddled with awesome movies.  There’s Sex Machine’s sex machine.  There’s also Cheech Marin’s performance as that disgusting vampire.  But what really stands out is George Clooney’s performance.  This is by far my favorite Clooney role.  His Seth Gecko is something that the television show could not capture.  Also, the vampires are not these pretty Twilight-esque creatures.  They are ugly, ravenous, and brutal.

Well, there you have it!  Next week, we watch a movie by director Quentin Tarantino.  The random number generator has picked movie number seven on my Tarantino list.  That means that next week’s movie is Death Proof.  I have some interesting real-life memories of the movie.  I cannot wait to share them with you.  Until then, be sure to join me for anime Thursday, where we will discuss Planet With.  It was supposed to be ISLAND, but I had to take it off the watchlist for being super boring.  Don’t forget about Serenity Sunday and episode 3  of Firefly.