Hello everybody!  I hope you find serenity this Sunday!  Today, we are going to talk about Firefly episode 12, The Message and episode 13, Heart of Gold.  These episodes are not as fun as other episodes, but they are still great episodes because Firefly can do no wrong.  If you need a refresher on the characters, read about episode 1. 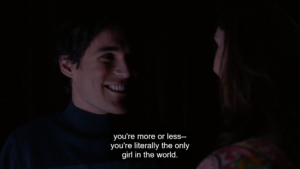 If we’re talking about wooing the ladies, Simon is about as smooth as a piece of sandpaper.  While Kaylee and Simon were looking at an alleged alien (it was a cow fetus), Simon is saying all the right things.

Then, he basically says that she is pretty much the last woman on earth.  He makes it sound like if he had better options, she wouldn’t stand a chance.

Of course, he did not mean it that way, but I still rolled my eyes.  How can someone that is so smart say things that are super dumb?  Now that I think about it, the only person on the ship that may be able to give him pointers on courting is Sheppard Book.  Wash is a dork, Jayne is a jerk, and Mal is just as clueless as Simon.

Tracey and Kaylee (sitting in a tree???)

While Simon was walking around with his foot in his mouth, Queen Zoe and Mal get a huge package.  It turns out that it is the body of an old subordinate from the war, Tracey.

Tracey sends along an audio recording, asking Zoe and Mal to take him home to be buried.  Kaylee listens to audio, feeling some sort of attachment to Tracey.

It turns out that Tracey is alive and using Zoe and Mal to get away from some Alliance guy.  He takes Kaylee hostage trying to get away.  You would think Kaylee would be wary of strangers after being shot.  But, her disposition is too sweet.

Tracey dies anyway and they still take him home to his family.  The scene is very moving.  In the end, we see Simon and Kaylee holding hands.  He may be socially awkward, but at least he won’t kill her.

Inara receives a distress call from an old friend from companion academy, Nandi.  Nandi runs a brothel that is threatened by a real a-hole named Ranse.  She asks Mal to help protect the unborn child of Ranse.  The child is carried by one of Nandi’s prostitutes.

There’s quite a bit of hanky-panky in the brothel.  Most of it is Jayne having sex with one of the ladies.

But, Mal has sex with Nandi.  This devastates Inara, no matter how brave of a facade she tries to put on.

Mal having sex with someone Inara knows is in poor taste.  But, Inara would have felt the same way if Mal had sex with anyone.  It’s like she expected him to pine after her forever.  And when he finally gets laid, she decides it’s time to leave Serenity.

My best guess is that there is some sort of heartbreak in her past that leads her to decide on leaving.  Her deep affection for Mal frightens her.  I understand that!  But, you can only call someone a crook and a thief for so long before they start to believe that you are not interested.

At the end of the episode, Nandi dies, the douchebag Ranse dies, and Inara decides to leave Serenity.  Honestly, I really didn’t care.  Inara was always the least interesting character, so I was like “bye, girl”.

Okay, we have another “who is Shepard Book” moment in episode 12.  He is sitting in the cockpit looking at the radar.  He notices that the alliance members chasing them did not notify the nearest Alliance HQ that they were in pursuit.  He deduces that the return of Tracey’s body is an off-the-books job.

This dude knows too much about Alliance protocol not to be a former Alliance intelligence officer or something.

These two episodes give the series more layers.  If the show continued, we would have seen how these complicated relationships impacted the people and the crew as a whole.

Well, that’s it for Firefly, episodes 12 and 13.  Next Sunday, we will conclude our discussion with episode 14 and the movie Serenity.  Before I move on to Psycho-Pass, I want to take on the last look at Firefly as a whole.  There are so many things we can take from the show and the movie.

Until then, be sure to join me this Tuesday for Radiant episode 4.  On Thursday, I will review Ace Attorney, episode 4.  I hope you had a terrific weekend!