Hi Everyone!  Welcome back to MC Tuesday, where we watch a movie from the Marvel Cinematic Universe.  Last week’s movie is The Incredible Hulk.  This week, we are back with Tony Stark (Robert Downey Jr.) in 2010’s Iron Man 2.  When I first saw this movie, I remember not caring too much for it.  But, I could not remember why I have these negative thoughts.  However, after this viewing, I remember why I have such a distaste for this movie.  Even so, there are some things about the movie I like.  Jon Favreau is the director, just like in the first Iron Man.  Let’s examine my love/hate relationship with this movie.

I thought we’d make a feedback sandwich.  So I’m going to start with a positive.  Mickey Rourke plays Tony Stark’s nemesis Ivan Vanko.  They could not have picked a better villain.  He looks like an evil villain.   He just looks like a guy with a vendetta.  When he shows up in Monaco with his electric whips and starts beating on Tony Stark, it is very entertaining.  That would make a cool band name, “Mickey Rourke and the Electric Whips”.  But, “Ivan Vanko and the Electric Whips” sounds cooler.  He can go either way. 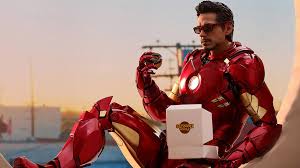 As much as I like Ivan Vanko as a villain, Tony Stark gets on my last nerve.  My eyes roll so much in this movie, I am surprised I do not have a migraine.  He is out of freaking control.  First off, that entrance into the Stark Expo with the Iron Man dancers is too much.  Then that speech basically saying “you’re welcome” followed by “but it’s not about me”.  Give me a break.  Then he goes into this hearing (this scene is too long by the way) and flaunts more of his ego.  And if I am not annoyed enough, he races in the stupid Grand Prix.  Are you kidding me????  How are you supposed to save the world when you are in an accident at the Grand Prix?  Or, if Micky Rourke and the electric whips show up to knock you down a peg or two?

And just when you think it cannot get more narcissistic, here comes Justin Hammer (Sam Rockwell).  Let me say that I like Sam Rockwell as an actor.  He is a superb actor.  I listened to a podcast interview and he also seems like a pretty cool guy.  But, I hate Justin Hammer…HATE!!!  It’s not because he is a bad guy.  Ivan’s a bad guy and I’m a fan.  It is just too much sleazeball antics happening during the film.  Plus, he is supposed to be the head of a major corporation, but he is incompetent.  It does not make sense.

I am all for girl power!  For me, Pepper Potts (Gwenyth Paltrow) embodies a strong woman.  What she lacks in physical power, she makes up for in wit and conviction.  She has to put up with Tony Stark shenanigans and she handles it like a soldier.  She deserves to be CEO while Tony is saving the world and being a jerk (not always in this order).

This is also the first time we see Agent Romanov (Scarlett Johansson).  She possesses the brains and the brawn.  The first time we meet her, she beats the crap out of Starks driver Happy (Jon Favreau).  That scene when she breaks into Hammertown is one of my favorite scenes in the movie (I know Hammertown isn’t the name, but it feels like something Justin would say).

In our timeline, this is the first time we see quite a bit of Nick Fury (Samuel L. Jackson) and Agent Coulson (Clark Gregg) of S.H.I.E.L.D.  Quick aside: when Nick Fury says “I’ve got my eye on you”, I thought I would never stop laughing.  Only Sam Jackson can deliver that line in that way.  Anyway, their scenes also link us to our next movie!  Agent Coulson mentions that he is going to New Mexico.  Also during the stinger (the part after the credits), we see Thor’s hammer.

Well, that’s it.  Today’s my birthday so I’m going to go drink more wine and enjoy my evening.  As I have said, we will begin February with Thor.  Yay!  I like this movie. I will see you on Anime Thursday!  In honor of my birthday, I will tell you a little about myself via one of my favorite anime, Blood Blockade Battlefront & Beyond.  I will see you then!