Hi everybody!  Welcome to Marvel Cinematic Tuesday, where we watch a movie from the Marvel Cinematic Universe.  Today we are talking about Daredevil.  We are not talking about the Netflix original, we are going back to 2003.  The movie is written and directed by Mark Steven Johnson and stars Ben Affleck in the lead role.

I thought it would be interesting to explore the MCU before it is the MCU, the 21st Century Fox MCU.  Now, when I watch these movies, I try to do the compliment sandwich.  I can’t do it, I just can’t do it.  This movie is the worst.  I thought Ant-Man sucked.  This movie really takes the cake.  Since I can’t do the compliment sandwich, I’ll go least to worst.

The Daredevil in the Darkness 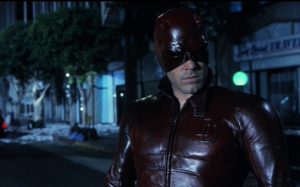 This movie is dark.  I’m not talking about tone, or mood, or anything of the sort.  It is literally dark.  The first Batman movie was made in 1989 and it was better lit than this movie.  It’s not just that most of the scenes are at night…again…Batman.  I guess the director was going for a gritty feel.  But it does not feel gritty, it feels like they ran out of money for the light bulb budget.  It sucks any energy out of the movie. 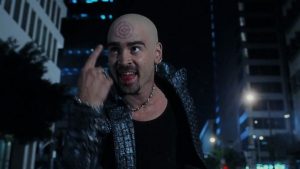 WHO EDITED DAREDEVIL???!!!  None of the entrances or scenes made sense.  The movie wasn’t cut, it was hacked to bits.  For example, the first fight scene.  Daredevil is up in the rafters in the bar, about to get “justice” for a victim.  The way he fights through this bar is stupid.  One second, he’s surrounded, the next second, he’s not and has space to run.  And this is one of the best scenes compared to non-fight sequences.  The transition between Bullseye’s introduction and Matt Murdock in the courthouse is a mess. 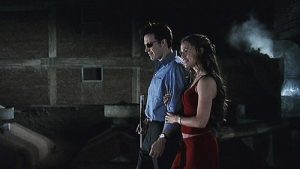 Jeez!  The acting!  Let’s just go down the list.  Michael Clarke Duncan plays the main villain The Kingpin. He was okay in his scenes, not his best work.  Jennifer Garnder is Elektra. Her acting is fine, but her lines are corny.  Colin Farrel is Bullseye.  His scenes did not feel crazy in a good way, but crazy in a spastic way.  The only scene I liked with Bullseye is the airplane scene when he kills that old lady with a peanut.  But then he ruins it somehow by asking for more peanuts.  Ugh!

To top off this acting disaster is Daredevil himself.  This should have been a warning when they cast him as Batman.  Here’s my problem with Affleck.  I remember thinking how great he is in Dogma.  But, now that I think about it, Matt Damon was with him, and he did fantastically.  And in the other scenes were Jay and Silent Bob, Chris Rock, Jeremy Piven, and a bunch of other people.  So, maybe he was good, maybe everyone else made him look good with their superior acting.

(After saying the above, I realize it may have been bad writing that made the acting in Daredevil terrible.  Still not feeling Affleck though.) 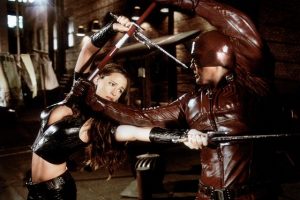 At the end of the day, this movie is garbage. The lighting’s bad, the writings bad, the acting is mediocre, and it’s all just a big mess.

Well, that’s it for Daredevil.  Next week is Elektra.  It’s written by the same guy, but a different director.  I remember liking it, but we will see.  Be sure to join me next time for some anime talk.  I will see you then!