Hi everybody!  Welcome to MC Tuesday, where we watch a movie from the Marvel Cinematic Universe.  Last week, we watched the horrible Daredevil.  This week, we continue our “before the MCU was the MCU” journey.  This week, we watch 2005’s Elektra starring Jennifer Garner.  This movie is directed by the same guy that directed Daredevil, Rob Bowman.

If you read the comments on Daredevil, you know that Karandi did not like Elektra (read 100WordAnime).  I remember liking it.  But, Karandi said it was the same dialogue over and over.  Karandi, you gave that movie too much credit.  Let’s get into it.

Before I drag this movie, let me refresh your memory.  The movie takes place after Elektra is killed in Daredevil.  A monk brings her back to life and she starts training under his tutelage.  But he kicks her out of the dojo and she becomes an assassin.  So, one of her targets is a little girl named Abby (Kirsten Prout) and Abby’s dad (can’t remember his name, and I don’t care).  After meeting the little family, Elektra decides to protect them from the Hand, an evil organization led by Master Roshi (Cary-Hiroyuki Tagawa).  It turns out that Abby is “the treasure”, some sort of powerful weapon.  There’s not a compliment sandwich, it’s an insult sandwich.  So let’s go negative first. 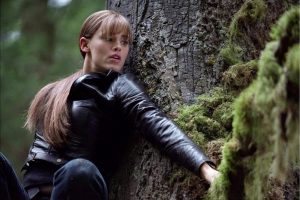 The movie is written by Mark Steven Johnson, the writer of Ghost Rider (which is also directed by Rob Bowman).  The movie begins with this stupid history narration.  It kind of reminds me of the beginning of Hercules: The Legendary Journey, or Xena: Warrior Princess.  It is extremely lame.  The rest of the film is boring, forgettable lines.  The tone is set in the first scene when she kills some Hand lackey.  He starts the movie and I feel like I’m watching a terrible high school play.  The writing is corny.  Karandi, I cannot tell you if the writing is repetitive because I cannot remember any of it.  So, I’m just going to take your word for it.

Some of the villains aren’t terrible

The main bad guy has this really interesting crew.  One has poison fingers, another has animal tattoos that come to life, the other guy has a body that is a  bullet-proof vest, and there’s some knife guy.  I liked the bad guys’ powers.  It made those scenes somewhat interesting.  But then, they completely destroy the coolness of those scenes with something very, very stupid. 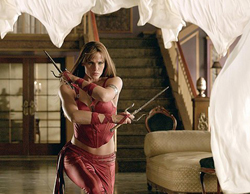 Once again, we go back to the conversation between Karandi and me.  I said that I think that I like the movie, but I remember a bunch of sheets.  What I was recalling is the “climax” of this movie.  Elektra is in her old house, where all the furniture is covered in sheets.  The main bad guy Kirigi (Will Yun Lee) comes to kill her and abduct the “treasure”.  Suddenly, these sheets start flying around.  Elektra cuts through the sheets, trying to get Kirigi.  I know this is supposed to be a cool effect, but the sheets are problematic.  They are distracting and make the scene too busy.  I think they should have done less sheet work and focused on the fighting, similar to the fight in the maze.  It’s like they did not believe in the fighter’s ability.

Yeah, not crazy about this.  There are boring conversations, not enough action, and not enough evil circus freaks.

Well, there you have it.  By the way, did you see Deadpool 2?  I will give you my thoughts on it soon.  Next Tuesday is our favorite daywalker, Blade.  Until then, I will see you on anime  Thursday where I give you some more conversation on Butlers x Battlers.  See ya later!