Hi everybody!  Welcome to MC Tuesday, where we watch a movie from the Marvel Cinematic Universe.  Today’s movie is the 1998 vampire extravaganza known as Blade.  This movie kind of holds a special place in my heart.  I was nearing the end of high school. Techno is a big deal in the club scene and I was close to immersing myself in that world (yes kids, I was 17 in 1998.  I’ve never been ashamed of my age).  Those were wild and crazy times full of weird and wonderful experiences.  The song in the first fight scene (Confusion by New Order) was poppin’ in the club when I hit the club scene in Virginia Beach, VA.  But, I digress, the movie is directed by Stephen Norrington.  Let me start by giving you a refresher. 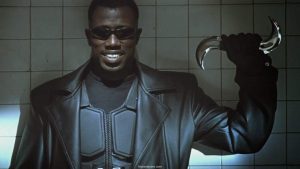 Let me take you back to an interesting time in vampire lore.  This time falls between the slightly homoerotic Interview with a Vampire and the sparkly nonsense of Twilight (let me segway quickly.  Once that vampire sparkled in the first movie, I was DONE!  I never watched the rest of that or any other Twilight movie!  End of rant).  During this time, vampires are not sensitive or Shakespearean.  These vampires are rowdy!  They wear leather and get fellatio in public places.  These creatures have no problems throwing children into traffic.  They have the normal vampire allergies: garlic and silver not crosses.  Their biggest vulnerability is the sun.  The worst vampire of them all is Deacon Frost (Stephen Dorff).  He does not like hiding in dark places like a cockroach during the day and he is scheming to make him and the rest of his kind sunlight ready, which will make humanity a 24-hour buffet.

What is standing in the way of him and daylight dominance is Blade (Wesley Snipes).  He’s a half-vampire that can walk in the daylight and do ninja stuff.  With the aid of Whistler (Kris Kristofferson) and Dr. Karen (N’Bushe Wright), Blade battles to save humanity from Frost and his roughneck vampire hoard.

Blade and The Bloodbath

This is going to be an open-face compliment sandwich, I have one good thing and one bad thing.  The rave scene in Blade is one of my favorite scenes in any action movie.  Imagine, you are with a hot person and you think you’re about to get some action.  They take you to a rave and completely ignore you, no matter how cool you think you are acting.  All of a sudden it is raining blood.  You’re covered in blood, the crowd is covered in blood and you’re completely traumatized.  And then to make matter worse, you are surrounded by vampires.  So, you did not get laid, you’re covered in blood, and you’re the only human.  Just when you are rethinking your life decisions, here comes an imposing figure in a trench coat.  He starts killing vampires in all kinds of ways: sword, shotgun, throwing stars, silver stakes, you name it.    He is tearing those vampires a new a-hole!  It is entertaining as hell and a great way for the movie to start. 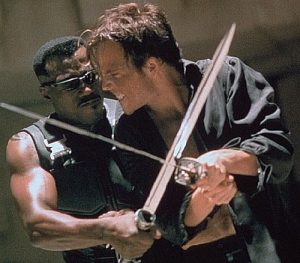 As I’m writing this, I realize that Blade, Elektra, and Daredevil all have the same problem.  They take themselves entirely too seriously.  The movie needs a little more light-heartedness.  We see it in Blade 3, but I’ll cross the bridge in a few weeks.  The writing is not good enough for this movie to be so serious.  If you are going to give me this much serious, then you need to give me action of Rambo or Terminator proportions.  Otherwise, you need to lighten up.

Serious tone aside, some of the action sequences make this movie tolerable, especially the first and last fight scenes.  Like I said, this movie is a bit of nostalgia for me.  I cannot be too hard on it.  At least the vampires still burn to a crisp like vampires are supposed to do.

Well, that is it.  I know I have been inconsistent, but school, life, and a new Amazon Fire Stick keep me preoccupied.  Next Tuesday is Blade 2, a very pretentious movie.  Until then, I owe you my final thoughts on Butlers x Battlers and you will get them some time this week.  I will see you later!