Hi everybody!  Welcome to MC Tuesday, where we watch a movie from the Marvel Cinematic Universe.  Today, we are watching the Chronicles of Riddick of Blade Movies, 2002’s Blade 2: Blood Hunt.  I did not even know this movie has a subtitle.  I always thought it was just Blade 2.  This movie is weird.  Maybe it is because it is directed by Guillermo del Toro, director of The Strain.  Or perhaps it’s just a terrible movie.  Let’s flesh this mess out together, shall we?  No sandwich this time, we’re just going to talk this through.

The Actors of Blade 2 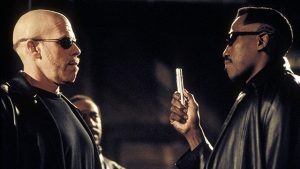 Blade 2 should not suck.  We have some real talent permeating this flick.  Of course, we have our hero Wesley Snipes, reprising his role as the daywalker Blade.  We are introduced to the tech-savvy yet traitorous Scud played by Boondock Saints/The Walking Dead phenom Norman Reedus.  The amazing Ron Pearlman plays the hater, yet still cool Reinhardt. 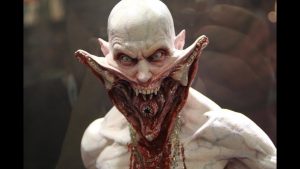 Let me back up for a moment and explain what this movie is about.  So, the secret vampire council (or whatever) has a huge threat.  There are a strain (like the show) of vampires that are immune to everything but UV light.  Unlike regular vamps, they feast on the blood of both humans and vampires alike.  This new crew is lead by Nomak, played by Luke Goss (I don’t know his work other than this movie).  He is experiencing daddy issues and that’s why he’s super angry.  At any rate, the vampire council elicits the help of Blade to rid the world of Nomak.  So, they call a truce for the sake of human and vampire kind. 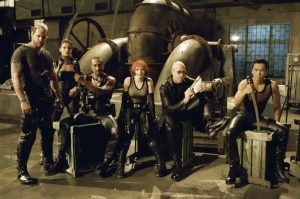 Of course Blade 2: Bloodhunt suffers from the same problem as the rest of the pre-MCU Marvel universe.  This movie is too freaking serious.  This movie is beef stew heavy.   Between the fight scenes are forgettable moments.  I cannot recall one moment from this movie.  If they would have injected a little more humor into this bland beef stew, they could have given it some much-needed flavor.

If I was not trying to stay true to the schedule, I would have skipped this one.  You have some good actors with a really boring script.  The fight scenes are okay, but it is not enough to redeem this boring movie.   Yikes!  This pre-MCU is a dark time, a dark time indeed.

Well, that’s it for Blade 2!  Next week, we wrap up our flashback with Blade 3.  I have a pretty specific reason for liking that movie, but I will discuss this next Tuesday.   Until then, I have two anime to finish for the spring season.  I will finish them tomorrow and give you my spring season wrap-up later this week.  I plan on watching and talking about Ant-Man and Wasp later this month.  I will see you later!!!