Hi everybody!  Welcome to MC Tuesday, where we watch a movie from the Marvel Cinematic Universe.  We have arrived at the best movie from the “pre-MCU” MCU.  It’s 2004’s Blade Trinity starring Wesely Snipes!  This movie finally gets something right that its predecessors could not quite get together.  I will come back to this in a moment.  The director for this one is David Goyer.  This guy has an interesting resume.  This is one of his earlier credits as a director.  He is the writer of Blade 2 and Batman v. Superman.  But, he has decent video game writing credits including Injustice: Gods Among Us and Call of Duty: Black Ops.  But enough about the director, let’s get into Blade Trinity.  We’re going to start with the negative and wrap it up with the positive.  Let’s do it! 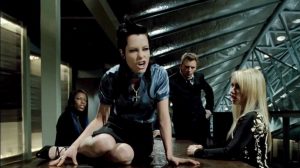 What’s so bad and also kind of great about Blade Trinity is the overacting.  These people are acting so hard it is hilarious.  Danica Talos (Parker Posey) is doing the absolute most.  There’s a lot of yelling and face.  Oh, the face!  Those angry faces are amazingly bad.  I did not know if I was watching Blade Trinity or a high school production of Othello. The techno music heightened the drama, which makes the overacting more apparent.  But there is a saving grace in this movie and the “pre-MCU” MCU franchise. 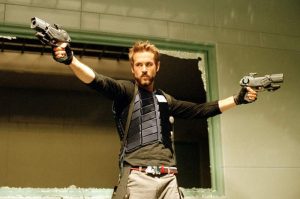 Ryan Reynolds.  I am a big fan of Ryan Reynolds.  And it’s not just the awesome Deadpool movies.  I like him in the rom-com and other action movies as well (except Green Lantern.  Yuck!).  He is the only one in the movie that wasn’t acting like his life depended on it.  But more importantly, he is our comic relief.  Finally, the creators realize that this they need some humor.  After four movies of heavy content, we get some humor (I just realized that I skipped The Punisher).  Maybe when Disney took over the MCU, they saw the need for a balance between the heavy subject matter, the action, and the humor.

The Past, The Present, and the Future 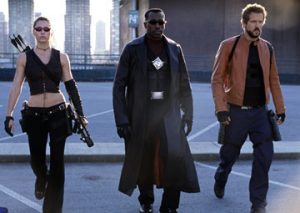 I have to say, this was fun.  The early 2000s MCU is a crazy world, full of drama, dark lighting, and bad writing.  Fast-forward a few years, and we will begin the MCU we know today with The Incredible Hulk.  From there, the MCU will make movies that will fuel Marvel fandom for years, all the way to the traumatic Infinity War.  In the future, I would like to see a reimagining of Daredevil, Elektra, and Blade.  I know Daredevil is on Netflix and Blade had a series and cartoons, but I would like to see it on the big screen again, with new writers and directors breathing life into the characters.  Heck, if they can make another Shaq Fu, they can remake these movies.

Well, that’s it, you guys!  Next Tuesday, I may squeeze in The Punisher.  It depends on when I see Ant-Man and Wasp.  Until then, join me Thursday, where I will let you know my summer anime watch list.  It’s only three anime, but that doesn’t mean I will not bring you my thoughts on others.  This is my last week of school for about five weeks.  I’m thinking about squeezing in a Sunday Drama to pass the time.  Just keep your eyes on Couch Crusin and social media.  I will attend my local anime con next weekend.  I will let you know how it goes!