Hello everyone!  I hope you find Serenity this Sunday.  Today, we are watching Firefly Episode 4, Shindig.  This episode takes us back to where our journey begins, the bustling planet of Persephone.  We run into an old friend, go to a swanky party, and deal with a bunch of snobberies.  Well, let’s get into the episode.  By the way, if you need a little character familiarization, go back to my post on Serenity episode one. 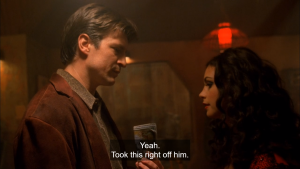 Mal and bars just don’t mix.  We begin this episode in a local bar with the captain, Jayne, and Inara.  Mal is playing pool with some guy, bragging about his slave ship.  After conversing with the guy for a bit, Mal tells Inara that she should head back to the ship.  We learn that Mal has lifted the guy’s money.  Before the group can make a hasty escape, the guy realizes he’s been robbed and a bar fight ensues.  This scene seems insignificant, just Mal being Mal.  But, this scene sets us up for events to occur later. 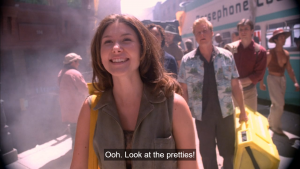 When the group lands on Persephone, they have to resupply.  Mal, Jayne, Zoe, Wash, and Kaylee are walking through town when Kaylee spies a dress shop.  She then says “look at the pretties”, like she’s five-years-old.  Mal basically asks her if she’s going to wear it around the engine room, which is super insensitive.  Kaylee gets angry and she, Zoe, and Wash go to resupply.  As they leave, an old buddy appears to have a little chat. 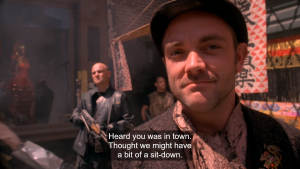 If you do not recall, we met Badger (Mark Sheppard) in the first episode.  He’s a criminal who thinks he has status.  He sits down with Mal and Jayne that he wants them to talk to a guy who wants his cargo smuggled off-world.  Badger does not have a good rapport with the guy, and cannot get a meeting.  Mal agrees to take on the job. 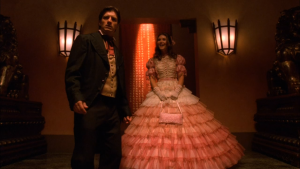 In the midst of this, Inara is preparing to meet a rich client on Persephone.  Atherton Wing (Edward Atterton) commissions Inara to spend time with him for several days.  This includes acting as his escort to a ball.  Coincidentally, this is where Mal will meet with the man who needs his cargo smuggled.  Kaylee accompanies Mal, wearing a cupcake…I mean a fancy dress.  The ball is full of people that have their nose so high in the air, that they can smell the next planet.  There is a group of girls that pick on Kaylee (no one’s allowed to do that but me!).  An old man comes to her rescue and she uses her mechanic knowledge to charm the men at the ball. 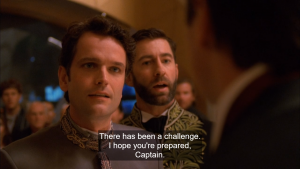 While in the ball, Mal punches Atherton for disrespecting Inara.  Mal doesn’t realize that he isn’t in a rowdy bar, this is “proper society”.  Atherton takes this as a challenge…to a duel…with swords.  Sword duels are not in Mal’s battle wheelhouse.  But, he must show up the next morning to sword fight with Atherton.

Meanwhile, Badger and his gang make his way onto Serenity to ensure that no one attempts to rescue Mal and escape.  River wanders into the cargo area while Badger and the gang are keeping an eye on the crew.  She puts on quite a show, mimicking Badger’s accent.  The Serenity crew is stunned. 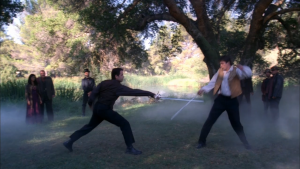 It’s the day of the duel.  Inara and Sir Warwick Harrow (Larry Drake) are concerned about Mal’s chances against the skilled sword fighter Atherton.  To make a long story short, Mal wins.  He spares Atherton and leaves him alive, humiliated.  Mal gets the win, the cargo (a heard of cattle), and a few wounds. 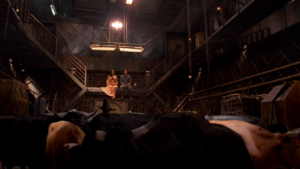 This episode of Firefly perfectly executes a combination that I will not see again until Westworld.  We see a combination of cultures in one show.  We have the wild west aesthetic with a futuristic, sci-fi theme.  This episode brings in a Victorian vibe.  We have duels, waltzes, and big poofy cupcake dresses.

Well, that’s all for Firefly episode four.  Next week, we will watch episode five, Safe.  I do not have many memories of this episode, so it will be like viewing it for the first time.  Until then, join me for Rod-Tino Tuesday, where we watch The Faculty.  And Thursday, we return to Angolmois: Record of Mongol Invasion.  I will see you later!