Hi Everybody!  Welcome to Serenity Sundays where we watch an episode of Firefly.  I was originally going to do two episodes per week.  But, after re-watching the first episode, I realized that every episode deserves its own post.  Firefly is a sci-fi /western show that ran on Fox between 2002 and 2003.  Fox canceled the show after one season due to low ratings.  But, how can such a wonderful show get low ratings?  I looked back at the top-rated shows at that time.  Everything was reality competitions shows, procedural dramas, and sitcoms.  The powers that be probably decided to squeeze in another day of American Idol in the week. 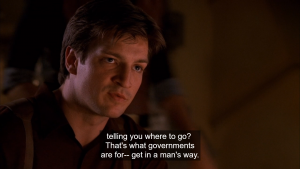 The problem is that Firefly was ahead of its time.  It may have done better now in the time of The Walking Dead and Game of Thrones.  Today, the Joss Whedon show is a cult classic with 14 episodes and a movie.  Enough history, let’s get into the first episode. 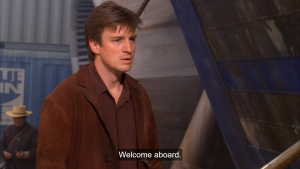 The first episode introduces us to the crew and passengers of the Serenity, a Firefly-class cargo ship.  The captain of the ship is Malcolm “Mal” Reynolds (Nathan Fillion), a former soldier who quit the game after the Rebels lost to the Alliance.  His second in command is the loyal and fierce Zoe (played by queen Gina Torres).  Zoe is married to the ship’s pilot Wash (Alan Tudyk).  I love that Mal and Zoe are platonic and Zoe is married to the nerd.  The ship’s mechanic Kaylee keeps the Serenity flying.  She kind of annoys me because she talks like a baby.  I guess she is supposed to project some sort of innocence.  She could’ve done that without the baby talk.

Jayne (Adam Baldwin) is the brutish, greedy, mean guy that is the muscle of the group.  Of course, he’s my favorite character.  The beautiful Inara (Morena Baccarin) rents one of the shuttles to carry on her duties as a companion (an escort).  Her job is considered prestigious, so she brings some credibility to the Serenity. 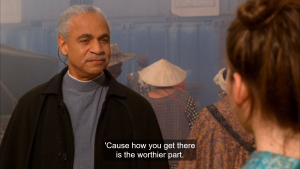 Six years after the war, Mal and his crew are illegal salvagers.  They come upon a wrecked ship that has cargo that belongs to the Alliance.  They salvage the cargo and take it to Persephone to sell.  This is where they run into the rest of our characters.  Shepard Book (Ron Glass) left the abbey to see what the world has to offer.  Mal has no time for the Shepard and his religion.  He makes that abundantly clear.  Dobson’s just a dude…a dude with a secret.  Simon (Sean Maher) is a doctor who is carrying a large crate.  I will return to this crate in a moment.  The passengers board the Firefly, bringing a bunch of trouble.

Deception on the Serenity 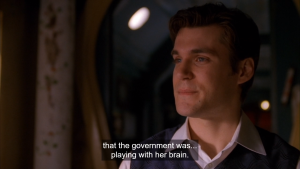 Mal is having the worst week ever.  First, he is almost busted by the Alliance while salvaging the loot.  Then, he learns that Dobson is Alliance and has alerted his buddies as to the Serenity’s location.  Mal learns that Dobson is not after the crew, but after Simon.  It turns out the crate contains Simon’s sister River (Summer Glau) who is in some sort of cryogenic sleep.  Simon escaped with her when he learned that they were doing experiments on her.  On Whitehall, Mal is almost killed by Patience, the woman who is making a deal with Mal for the cargo.  Once he’s out of that pickle, he is alerted that Reavers followed them to Whitehall.  Reavers are savage humans that will rape, kill, and skin the crew if the Serenity is captured.  Thanks to Wash’s piloting, they are able to escape the Reavers. 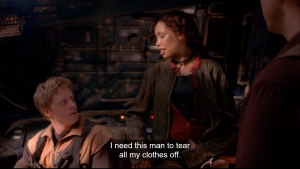 What makes this show interesting is that the characters are not one dimensional.  On the one hand, Mal is a tough guy that has no problems shooting Dobson in the face.  On the other hand, he is generous enough to spare Simon and River and invite them to stay on the ship.  Jayne is a d-bag but was ready to kill Dobson when he accidentally shot Kaylee.  Zoe is tough as nails but is madly in love with nerdy Wash.  I could go on about the characters, but I think you get the point.  It’s the complexity of the characters that peaked my interest.  But, it’s the second episode that made me a fan. 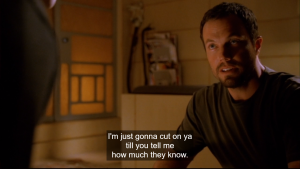 Well, that’s it for episode one of Firefly.  Next week, I will tell you about the epic scene that made me a fan.  If you like the show, you probably know what I’m talking about.  Until then, be sure to join me for MC Tuesday and Ant-Man and Wasp.