Hi everybody!  Welcome to MC Tuesday, where we watch a movie from the Marvel Cinematic Universe.  Today’s movie is Ant-Man and The Wasp.  This movie had some obstacles.  The first Ant-Man was not a good movie.  Second, there was not a lot of buzz around this movie.  This ties into the third issue.  Ant-Man and The Wasp follow two epic movies in the MCU, Black Panther and Avengers: Infinity War.  So, this movie was fighting an uphill battle from the beginning.  The movie is directed by Peyton Reed, the same director than the first movie.  Let’s get into it.  Spoilers guys!!!

I have popcorn, that’s all the corn I need. 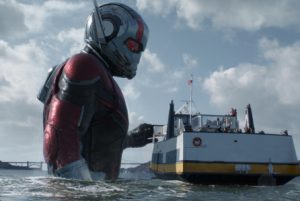 Here we go again.  From the beginning of the movie, we deal with a bunch of corny jokes.  This movie relies heavily on Scott Lang (Paul Rudd) and Luis (Michael Pena) for humor.  But, the movie lacks a good story.  Between the “laughs”, there is a boring story about Hope (Evangeline Lilly) and Dr. Pym (Michael Douglas) trying to rescue Hope’s mother Janet (Michelle Pfieffer) from Shrunken World (that’s not what they call it.  I just can’t remember the science words).

Weak, very weak.  I did not expect bad guys of Thanos proportions, but these villains kind of fade into the background.  If memory serves, the villain in the first Ant-Man was also a dud.  Instead of adding two mediocre villains, they should have focused on one strong villain.  First, we have Sonny Burch (Walter Goggins).  He’s a lot like the villain in the first movie.  He’s some sort of black market technology dealer or something.  His involvement in the movie seems pointless.  If anything, it is a distraction.  Next, we have Ava a.k.a. Ghost (Hannah John-Kamen) with assistance from Dr. Bill Foster (Laurence Fishburne).  They tried to cram so much junk into this movie, that her character development felt rushed.

It’s not all bad

Some of the action in this movie is pretty good.  The car chase scene is pretty exciting.  It injects some energy into a drab movie.  Also, The Wasp’s first fight scene was pretty cool.  The movie could have used some more action and less cheeseball humor.

There are two stingers in this movie.  The second stinger is just a cute little moment with an ant.  The first stinger connects the movie to the rest of the MCU.  I think this scene will be important in Captain Marvel as well, but that’s just a theory. 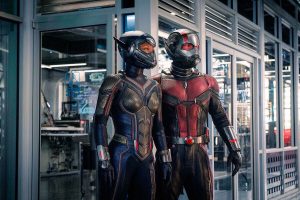 This could have been a Netflix original.  I thought Ant-Man and The Wasp was just a box that needed to be checked on my checklist.  But it looks like Marvel Studios shared the same sentiment.  I hope this is the last Ant-Man movie until they are ready to take it seriously.  They need to balance the humor, action, and dramatic parts of the film.  Do not give us corny humor, some action, and dramatic scenes that fall flat.

Well, that’s it for Ant-Man and The Wasp (thank goodness).  This will be the last MC Tuesday until the next major MCU movie.  Next Tuesday will be the start of Rod-Tino Tuesdays.  We will watch a random movie from directors Quintin Tarantino and Robert Rodriguez.  I will alternate between directors each week.  The first movie will be announced Sunday.  Until then, I will see you on Thursday for my review of Angolmois: Record of Mongol Invasion.  Serenity Sunday will consist of episode two of Firefly.  I will see you later!