Hi everybody!  Welcome to MC Tuesday, where we watch a movie from the Marvel Cinematic Universe.  Before we get into the today’s movie, I wanted to apologize for missing Sunday.  It was the last day of school and I had some assignments to finish.  This past weekend was exhausting.  I used Monday to decompress and recharge the batteries.  But Serenity Sunday will convene this Sunday with episodes 1 and 2 of Firefly.  Now let’s get back to the movie.  Today’s Marvel movie is 2004’s The Punisher.  This is my first time watching this movie, that is directed by Jonathan Hensleigh.  Let me refresh your memory. 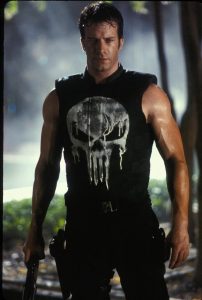 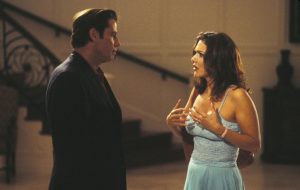 Did you see that episode of Archer when he kills a bunch of people that are members of a counterfeit cancer medicine ring?  Take that episode and add cunning and calculation.  This is what happens in The Punisher.  I thought the Bride from Kill Bill was nothing to mess with.  I think Frank West outdoes her.  Not only does he kill a bunch of people, he sets it up so Howard kills Howard’s wife and his BFF Quintin.  NOW THAT’S JUSTICE.  He destroyed Frank by making Frank self-destruct.  In one of the crazier scenes, Frank thinks his wife is cheating with Quintin (who is gay).  So instead of just shooting her, he throws her onto some train tracks where she is HIT BY A TRAIN!!!

The Writing or The Acting? 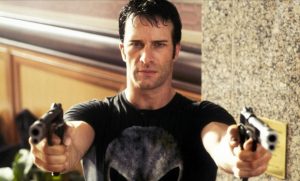 The action in this movie is awesome.  But, when the actors have to deliver a line, it sounds corny.  I do not know if it’s bad acting or bad writing.  Hensleigh is a writer on the movie along with Michael France.  France also penned Cliffhanger, Fantastic 4, and GoldenEye.  I do not remember the dialogue in those movies setting the world on fire so I’m thinking the writing is the problem.  Luckily, we do not have many conversations in this movie.

At the end of the day, the movie isn’t bad.  Unlike Elektra, Daredevil, and even Blade 2, The Punisher feels a little more energized.  Perhaps it’s because it is set in Tampa and there’s constant action.  It’s like Hensleigh understands that this isn’t an Oscar bid, but an antihero movie.  It doesn’t feel heavy and steeped in melodrama.

Wrapping it up and Announcements

Well, that’s it for The Punisher! Next time, we will talk Ant-Man and Wasp.  This will be the last MC Tuesday until Captain Marvel.  Instead of digging for more Marvel content, I decided to take Tuesdays in a new direction.

At first, I thought about covering DC movies.  But, there are too many movies that I do not like.  That is just too painful an experience.  So instead of forcing myself to watch DC, I want to talk about two significant directors in my moviegoing experience.  So, in two weeks we will begin our look at the works of Robert Rodrigues and Quintin Tarantino.  I will alternate between the directors’ movies that will be selected at random.  This will be a perfect companion with Serenity Sundays.

Alright, gang!  I will see you this anime Thursday for Angels of Death.