Hello everybody.  I hope you find serenity this Sunday.  Today, I will discuss episode five of Firefly, Safe.  There’s lots of insight into Simon and River.  Simon takes a significant turn between the beginning and end of Safe.  I’ll go into detail in a bit.  But first, a little about the episode.  As always, if you need a refresher on our characters, click here.

From cows to bullets 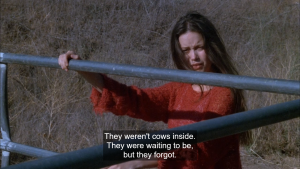 At the end of episode four, we see that Mal’s cargo is a herd of cattle.  Well, he and the crew are on their way to offload the cargo and get paid.  They land on the remote planet to do the deal.  Mal and Jayne will handle the deal.  Sheppard stands by to observe (I guess).  The rest of the crew heads out to explore.  Mal orders Simon to take River into town to keep her from disrupting the deal.  Lately, River has been more erratic than usual.  Simon protests but Mal doesn’t leave him a choice but to head to town. 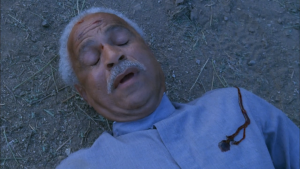 During the course of the deal, Sheppard is shot in the chest.  It’s a pretty bad injury.  Mal sends Wash to find the doc, but he and River are kidnapped by the local mountain folk.  The people find value in Simon and wants him to remain as their doctor.  This probably would have been a good move, but they think River is a witch and try to burn her.  Mal shows up in time to save them.  Sheppard is treated by the Alliance and recovers (I’m going to come back to this).  And the crew keeps flying. 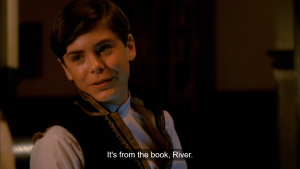 As I previously stated, this is a very Simon and River-heavy episode.  We see that they grew up in a very rich family.  Fun fact: The little boy that plays young Simon is Zac Efron.  Anyway, Simon’s upbringing is why he is such a snob at the beginning of the episode.  He was not shy about expressing his disgust with the ship and the captain.  His nose could not be further in the air.  And that’s something considering he lives on a spaceship.  And what’s worse is that River senses his disdain for his present life.  I think she feels responsible for his present condition.  But, it’s not her fault her brother is a jackass.  By the end of the episode, he accepts his new life and recommits to his sister.  I’m glad he takes this turn because I would’ve spent the rest of the series hating him.

What’s up with the Sheppard? 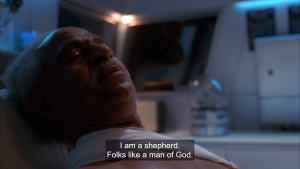 I do not remember if they answer this question later in the show or in the movie, but what’s up with Sheppard Book?  When he is shot, Mal turns to the dreaded Alliance for medical help since Simon was abducted.  At first, they are not willing to assist.  Then he gives the commander his ID.  All of a sudden, he is rushed to the clinic.  Sheppard claims it’s because he is a shepherd.  I think that’s bull.  I just cannot remember if this was addressed later.  If not, I guess the mystery will continue.  I refuse to Google it, that’s cheating. 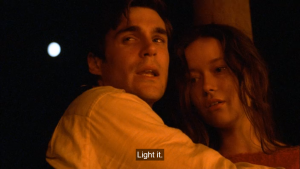 Simon needed this turning point in his journey.  He was still in the mindset of an aristocratic surgeon.  He needed to be humbled.  His willingness to burn with his sister was moving and shows his devotion to her.

Well, that’s it for episode five.  Next time, Mal get himself into a bit of a pickle in Our Mrs. Reynolds, episode six.  Until then be sure to join me for Pulp Fiction on Rod-Tino Tuesday.  Next Thursday, I will discuss Calamity of a Zombie Girl.  I was going to talk Harmonquest, but I will discuss that Saturday.